Kiss of the Fur Queen by Tomson Highway 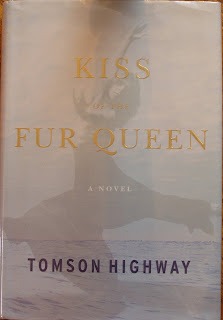 Champion (Jeremiah) and Dancer (Gabriel) are the youngest sons of Abraham and Mariesis Okimais, Cree, who live in the Northern reaches of Manitoba. At the young age of 7, both boys are sent south to be educated by the Catholic priests.

The priests' 'education' tries to remove all the 'Cree' from the boys and replace it with 'white'. Their language, their beliefs, clothing, food etc are taken away from them. They also suffer sexual and other abuse at the hands of the priests.

The impact of the Church and its 'education' follows the boys for the rest of their lives. The Church has tried to turn them into 'white men' but the colour of their skins won't allow for that to happen. Society continues to view them as 'only indians'. While each boy reaches the pinnacle of their chosen career they are viewed as 'the indian pianist' and 'the indian dancer' and not as 'the Pianist' and 'the Dancer'. Each of them struggles with what they know in their hearts, with what the Church has tried to force them to be and with how their families are twisted with 'white mans' ways.

This is a wonderful book. It brings the issue of Residential schools to life. Mr. Highway attended a residential school in the 1950's along with his brother Rene. He is a playwright and also has authored three children's stories (which I will review later this week).

Residential schools were a fixture in Canada for many decades with the last one in Saskatchewan closing in 1996. It was in the 1980's that students began speaking out about the abuses they had suffered. The Assembly of First Nations and the Canadian Government are still working toward a resolution to this serious issue.

This is my first book for the Canadian Book Challenge. Thanks to Kathleen Molloy for suggesting Mr. Highway as a author.
Posted by Heather at 17:26

I've been wanting to read something by him for some time. I've been eyeing "The Rez Sisters" but this looks good, too.

Despite all of the grey clouds ...there is a beautiful sliver of hope in this story : the tenderness between brothers.

Add your link or find a great recipe

I've been blogging here since 2007 and have finally found the perfect job. I am now a book seller at Chapters, the largest book store chain in Canada. This is helping to reach an even larger number of readers with whom I enjoy sharing my love of books.